“What Eldritch did to Leo on Luna or Sigma 14-B or wherever he’s done to me, too. And eventually he’ll snare us all. Just like this. Isolated. The communal world is gone. At least for me; he began with me.”

– The Three Stigmata of Palmer Eldritch by Philip K. Dick

One of the police officers smacks his flashlight with an open palm as we trudge across the yard.  It’s two in the morning.

“Have you ever seen the movie Seven?” he asks no one in particular. His partner is silent as we peer into a dilapidated tool shed, one of several scattered across the farm.  The broken lawnmower is a feral animal hunched in the flickering beam. There are no stars. Only darkness.

“What’s in the box?” the partner finally moans, dropping his hand from the butt of his pistol. I laugh a little too loudly.

It was the door that woke us. Not the first time an inexplicable and thunderous crash has startled us from sleep in the old farm house we rent on the fringes of Iowa City.

The door at the bottom of the stairs is made of heavy varnished wood and has to swing a full one hundred and eighty degree arc to close on its metal latch. Goddamn cats. My go to whenever something like this happens. But Remedy Wolfcat  is upstairs with us, and the only conceivable way Finn Tigerstar Antares could have managed to slam that door shut is if he was fired at it out of a cannon. Or if he was a person.

“You want to do what?” I said to Sarah, standing in my underwear with a baseball bat in my hand.  I’d just finished ninja jumping into every room, including the basement, where looms at a canted angle in one gloomy chamber, a refrigerator from the 1970s that we’d discovered tied shut when we moved in. 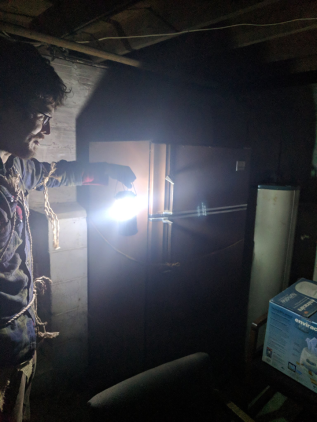 We’d gone home to the Chicago area for a few days over Thanksgiving. This was our first night back. Wrapped in a bathrobe, Sarah stared down at me from the top of the stairs.

“Mike,” she said in a resolute voice, “I won’t be able to sleep until I know for sure this house is empty.”

I grumbled and put some pants on and dialed the non-emergency number. The men with guns came and looked for demogorgons and lollygagging Kevin Spaceys but failed to find any. They left and we climbed back into bed, nowhere nearer—and I draw your attention to this—to knowing what force had acted upon the door at the bottom of the stairs.

Cats. The wind. All unsatisfying. Here’s the working theory (barring the discovery of a resident psychopath): The house was angry at us because we abandoned it over the Thanksgiving holiday. As cold winds begin to blow, at a time when other homes all around are ostensibly filled with warmth, light and laughter, ours sat empty and dark—alone.

So I start hanging out with the house. Putting in some real quality time. Want to go out for drinks, Mike? No thanks, I’ve got a date with a long porch and a steep pitched roof.

After a long day at work the real work begins. When Sarah’s away at class, I’m either locked in my office or skating around the kitchen in my socks, head banging to psych-rock and 80s inspired pop music. The weekend comes and Sarah’s at her crystal shop job. It’s just me and the house again, scrubbing dishes in the sink, drinking barrels of coffee, adjusting the thermostat up or down a crazy degree or two. I sweep the floors. I pace.

The ice caps continue to melt.  Soon the internet won’t be a thing. My ears are filled with blood and sand and nuclear bombs, the meteoric decline of the laboring class, maybe a pedophile in the senate. Everything is fake news, and everything is on purpose.

My latest attempt at writing science fiction has hit a snag. Probably because reality is weirder than anything I can come up with. For hours on end the screen is empty. Space delete. Space delete.

This is a job. You have to show up. And like any job, no less than your soul is demanded.

Wandering alone through the post-war wasteland of Boston, the realization dawns on me that I’ve completely lost my mind. I begin hunting bombed out city blocks for the ghost head of Wolfgang, a raider whose corpse I ritualistically dismembered and left in a pothole a few days ago in the name of the Great God Death. Radioactive ghouls crawl in through the windows, some wearing faces I remember. I run for my miserable life. Behind the trap of my gas mask, I mutter my brother’s  mantra as I sift through heaps of garbage: Disregard x, acquire currency.

I decide to take a break from politics and Fallout 4.

When I was still in school, I wrote a paper about one of Philip K. Dick’s many brilliant novels, The Three Stigmata of Palmer Eldritch. I found it in my desk the other day.

In the paper, I brashly claim to have pinpointed the ultimate dread behind Dick’s chemical fueled obsession with the tenuous—perhaps meaningless—line between what is and what is not; the true force that propels his hypnagogic imaginings, like a door slammed shut in the night, down their chilling narrative tracks: The fear of being alone.

Here’s something Dick wrote in 1966, in an essay entitled Will the Atomic Bomb Ever be Perfected? :

“Loneliness is the great curse that hangs over a writer. A while ago I wrote twelve novels in a row, plus fourteen magazine pieces. I did it out of loneliness. It constituted communication for me.”

I wake up in a strange house.  I try to write twelve novels in a row.  It doesn’t happen. I learn again what I’ve always known: you don’t have to be a writer to feel lonely.

Exhausted by the effort, I drag myself into the kitchen to make a frozen pizza for dinner and discover the baking stone is split in two, as if smote by a steely fist. I look up at the cracked ceiling and wonder.

The house was built in 1900. Turn of the century, 117 years ago. The shed where the broken lawn mower prowls was added in 1935. According to the county’s online records, the home used to have a built-in intercom system. I can find no trace of it.

In 2003, a woman named Marie Lucille Svatos died here. Probably in our bedroom, “surrounded”, her obituary says, “by her loving family.” She was born on February 4, 1930. She was a lifelong resident of the area. And an avid baker.

Personally, I think it’s a little too neat to blame Marie just because we know she happened to die here. Lots of stuff probably died here. Not weird enough.

We’ve tried all the normal white people things. Calling the cops. Burning store bought sage. Winterizing.  We even got a mystic from downtown to perform a ceremonial blessing on a stone, then placed it back in the foundations to act as a positive influence on its more rough and tumble friends.

Whatever it is, Sarah thinks the best way to keep our house in good spirits is to just throw more parties. I think Marie would like that.

“What do you think, Phil?” I ask, plugging in the Christmas lights.

He’s sitting by the window in my office with a cat in his lap.

It’s my party. Philip K. Dick can want to hang out with me if I say so.

“Duh,” I reply, and begin to type like the wind.